It was in the early 1990s when I first reviewed the evidence for zinc in respiratory tract infections. That particular book club during my residency still takes up space in my mind – I even remember preparing my presentation with overhead projector slides (that should give you an idea of ​​how long it was). At the time, the buzz was that zinc tablets or lozenges could shorten the duration of a cold. Even then, there were studies that dated back to the 1980s. Unlike many dietary supplements, the enthusiasm never completely died out over the following decades, as there was a slow trickle of weakly positive studies and poorly controlled.

In 2020, with the onset of COVID-19, there has been renewed interest in zinc to prevent infections or potentially lessen their severity. Given that colds can be caused by coronaviruses and there was somewhat positive (albeit conflicting) evidence for zinc in colds, this may not have been unreasonable – especially before vaccines became available.

Since the 1990s, the evidence for zinc has remained weak and unconvincing. Now there is a new study published in The BMJ from the NICM Health Research Institute at Western Sydney University. This institute is “Australia’s leader in integrative and complementary medicine research and policy” with funding from various levels of the Australian government as well as individuals and industry. The authors include a general practitioner, naturopaths and academics with a background in natural and ‘integrative’ medicine. Some of the authors report payments related to complementary and alternative medicine. However, this particular document was not commissioned, sponsored or funded by any particular organization.

Zinc is a trace mineral with functions throughout the body. Zinc deficiency is a significant problem worldwide, where access to a healthy diet and adequate calories is an issue. In some countries, foods may be fortified with zinc, such as breakfast cereals. Where regular diets include foods containing zinc (eg meat, shellfish, chicken, nuts, lentils) like many in the United States, zinc deficiency is less common, but still possible. Severe deficiencies in these countries are more common where there are chronic diseases that lead to reduced absorption (eg, inflammatory bowel disease) or following surgery of the gastrointestinal tract. Certain medications can also increase the loss of zinc from the body (eg diuretics).

Severe zinc deficiency is most often associated with impaired growth, but the effects also include immune system dysfunction. A zinc deficiency could possibly affect your sensitivity or response to cold viruses, including coronaviruses. Zinc might also have direct antiviral effects. The signals of benefit that have emerged in research on zinc supplementation and the common cold have led to lingering questions about whether or not zinc can significantly affect your susceptibility or response to a viral respiratory infection.

The evidence for zinc to prevent or treat the common cold

There is evidence that zinc containing nasal sprays can be harmful as they can cause temporary and, in rare cases, permanent loss of smell. Other formulations that have been well studied are lozenges and tablets. A systematic review, published in 2011, identified 13 placebo-controlled trials with wide variation in doses. Low doses (

This is not a new trial. This is an analysis of previously published randomized controlled trials. The authors stated that their review conforms to Cochrane guidelines on how systematic reviews should be conducted. I admit that I am not an expert in systematic review methodology, so I took their approach at face value. Some of our experts in the comments may have additional observations on the methods.

The authors began with a comprehensive search of the database to identify relevant trials. All randomized or quasi-randomised clinical trials were eligible for inclusion. The trials had to be specific to adults. Any type of zinc product or route of administration could be included. Any type of control group was acceptable. English and Chinese databases were searched up to August 2020, including searches for RCTs that investigated the effects of zinc against SARS-CoV-2. These searches included preprinted databases. The search and retrieval method followed standard rapid review retrieval methods, where data from each trial was checked by a second reviewer. The risk of bias of each trial was also assessed with a Cochrane tool.

From 1,360 articles and essays screened, 28 RCTs with 5446 participants met the inclusion criteria. Three essays were published in Chinese only. 95 RCTs assessing zinc in pediatric populations were excluded, as were seven RCTs investigating zinc in COVID-19, as these results were still pending.

The trial participants were generally in good health, with symptoms consistent with mild to moderate respiratory tract infections. The average age was 37 years old. The median sample size for the prevention studies was 53 and for the treatment studies was 78. Most of the trials (19) were conducted in the United States, including 5 in Europe, 3 in China, and 1 in Australia.

The authors note that most of the reported results finally had some concerns about the overall risk of bias. There were substantial differences in the trial in terms of design, drug formulation, population, etc., which called into question the overall observations. Here are the results for prevention respiratory tract infection:

If we ignore studies of nasal sprays (which have shown efficacy, but use a route of administration that can cause significant adverse effects), there is only one trial showing efficacy at 45 mg per day, and one that does not. does not at 15 mg per day. For the prevention of infection by direct inoculation of cold virus, zinc does not appear to be effective.

Here are the results for treatmentwhere cold symptoms have been studied: 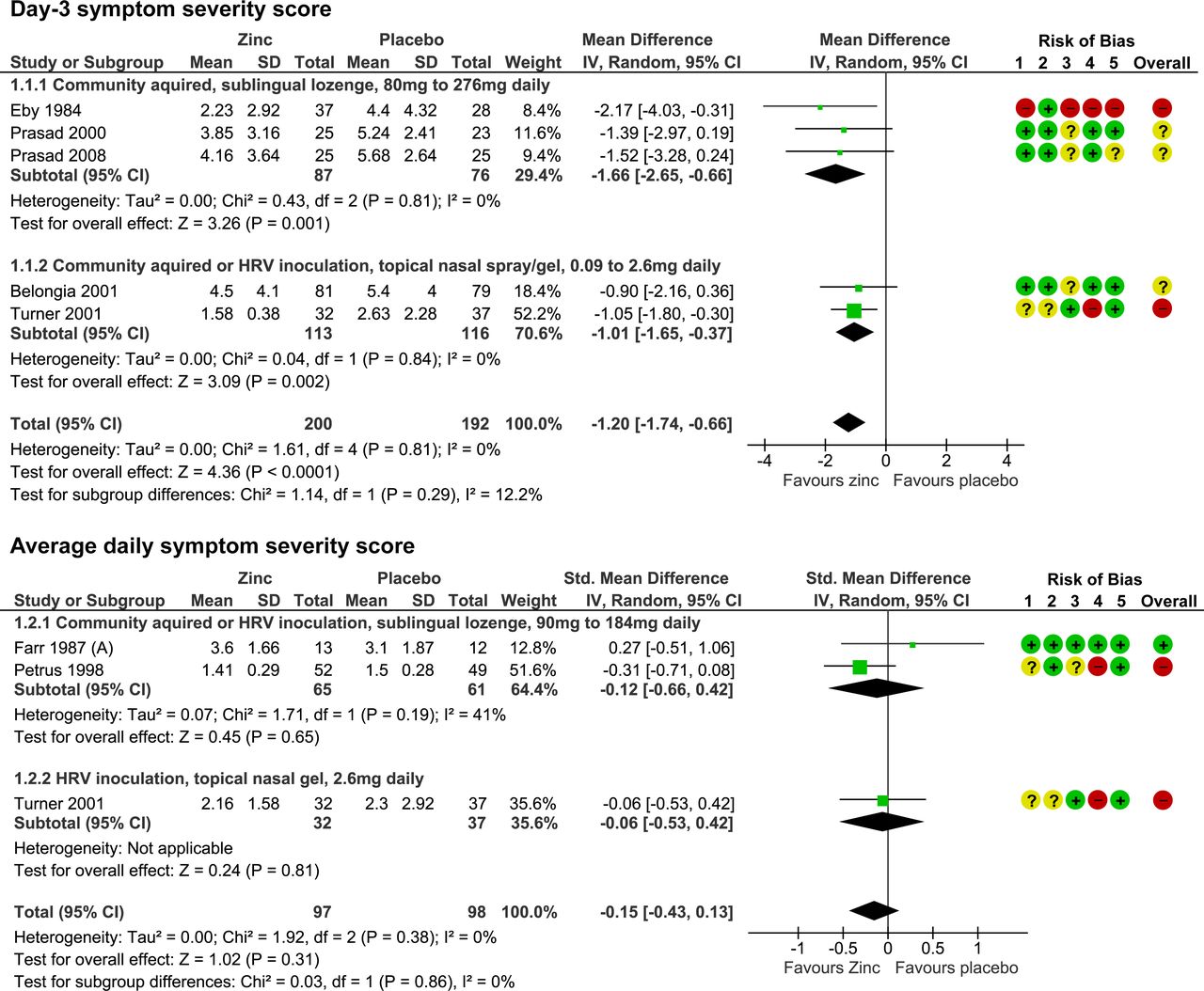 Even ignoring the topical trials, here the treatment outcomes (day 3 symptom severity score) look slightly more impressive and consistent, acknowledging that there are significant bias issues in these trials. And here is the duration of the infection results: 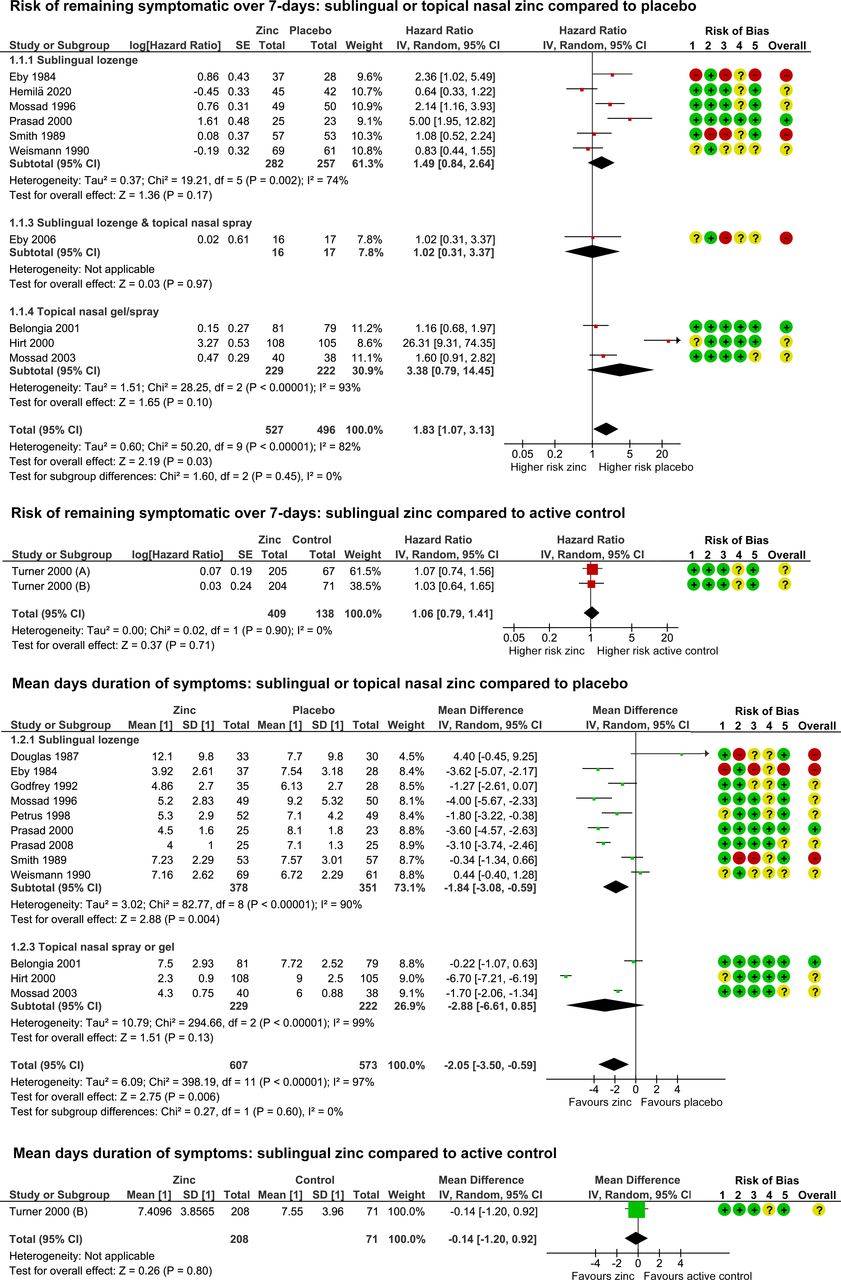 Again, modest but suggestive evidence in favor of zinc. Finally, here are the side effects: 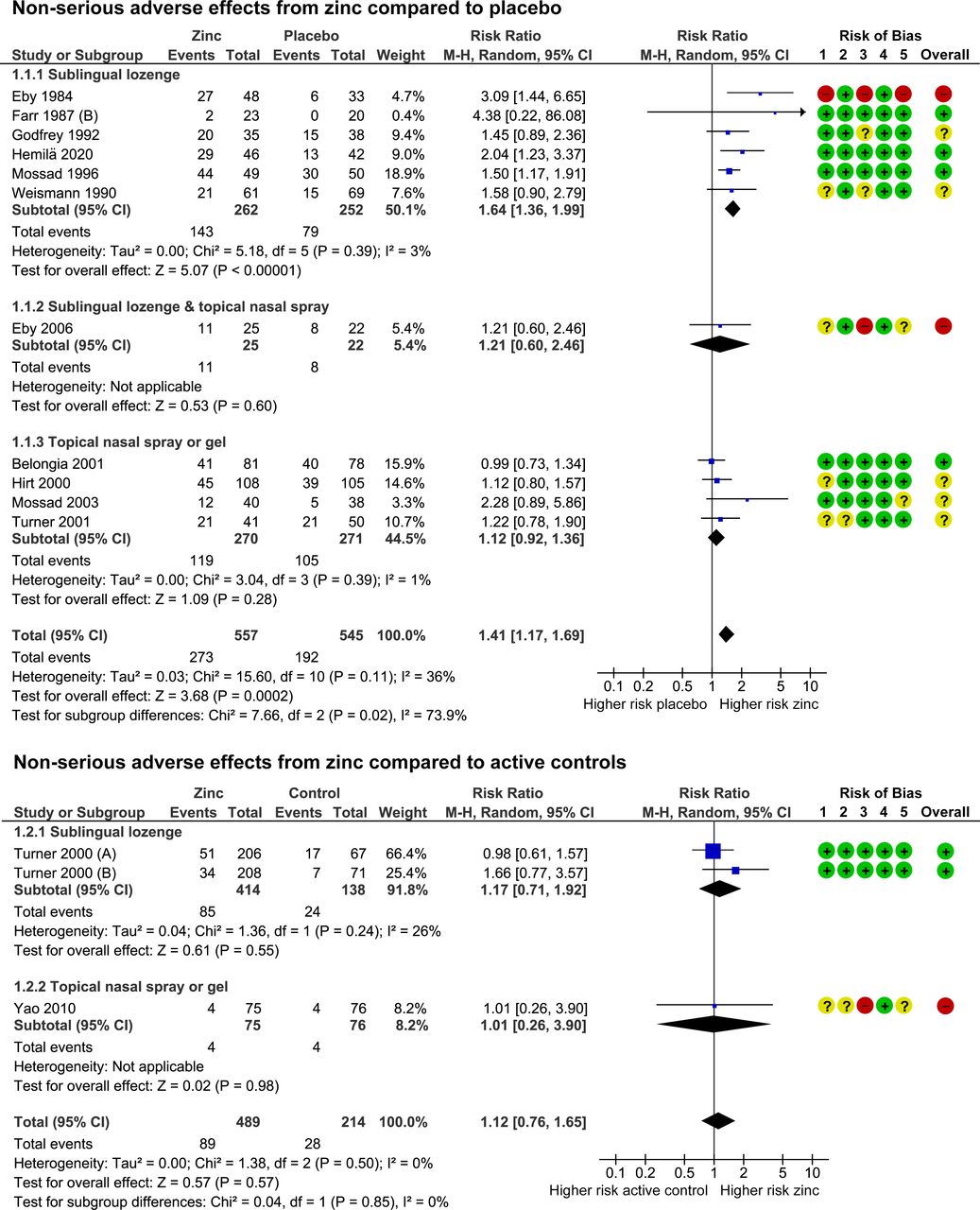 It is clear that zinc has side effects, with most trials reporting more side effects in the treatment group than in the placebo group.

Overall, the results were summarized by the authors as follows (emphasis mine):

Zinc is not a panacea

Despite multiple trials over the past 40 years, little evidence remains to show that zinc offers significant benefits for preventing or treating respiratory tract infections. Although there is some evidence that it can prevent infections and shorten their duration, the effects are modest. The authors describe zinc as “a viable ‘natural’ alternative”, but “viable” does a heavy lifting in this sentence. Zinc products have side effects that may be noticeable, and the topical nasal spray formulation is associated with rare but sometimes permanent disturbances in the ability to smell, which seems like a poor trade-off for a product that at the better, can provide a slight advantage.